The premises solutions for Linnanmaa were developed together

In 2020, Oulu University of Applied Sciences moved to renovated premises at the Linnanmaa campus. The CO-SYK joint development model was at the core of premises planning, involving people from different user groups in the project. The construction project was completed on schedule and exceeded expectations. 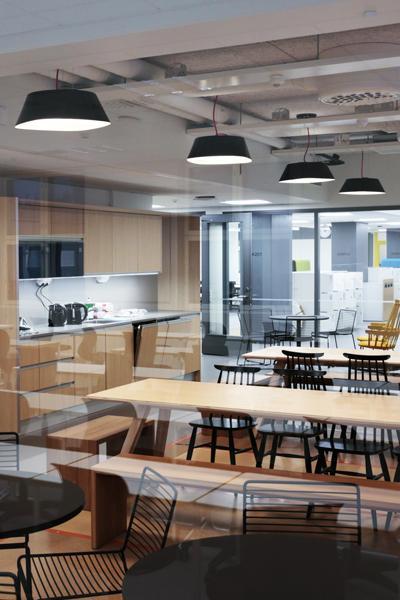 “The Linnanmaa campus contained premises released by the university, and it was possible to renovate them for our needs. In addition, the proximity of the university was a significant factor: as we are closer to each other, we have more agility to carry out joint projects,” says Vice Rector Jyrki Laitinen of the Oulu University of Applied Sciences.

The renewed premises were completed in stages during 2020. The premises planned for the information technology training programme were first commissioned in January, and all the remaining premises of the university of applied sciences were ready in the summer.

Improved efficiency of premises use as the starting point

Moving to one campus also meant that the halving of the total number of square metres. As the premises were smaller, a completely new space concept was required. From the outset, consideration was given in the planning to the future space requirements of a modern learning concept.

“For example, a visible change in teaching facilities is a decrease in the number of large lecture auditoriums. They have been transformed into flexible and modifiable common premises that support teamwork. Digitalisation has also become an increasingly important part of education, and this also had to be considered in the premises’ planning. The premises must be flexible for modification so that they will also serve future needs,” says Elina Hulkkonen, Account Manager at University Properties of Finland Ltd (SYK).

Joint development was the key from the outset

“The CO-SYK operating model was quite excellent. Thanks to the operating model, the entire project, discussion and idea creation succeeded very well. Although the project was very inclusive, it still did not feel burdensome. At some point, I said I was accustomed to the fact that there was always one problem or another with a construction project. We didn’t see any problems,” Laitinen says.

Through joint development, everyone has the opportunity to influence the end result. From the outset, the users of premises were involved in the design and provided valuable user information. The design work included various user meetings, workshops, pop-ups, seminars and briefings. SYK’s role was to lead the project, and act as a facilitator of joint development and an expert in construction.

“For example the Tilat, Minä ja Me (Facilities, Me and Us) seminar held digitally in April 2020 lingers in my memory. The seminar was attended by experts of SYK’s construction project, who discussed taking joint development and sustainable development into account during the project and the quality of construction work, for example. A representative of the Information Technology Unit was also heard and shared good tips and user experiences about changes and premises,” says Hulkkonen.

In particular, three things particularly contributed to the project’s success: construction without major problems, regular and well-prepared meetings of the university management, as well as close and interactive dialogue between the actors throughout the project.

“Every participant’s wishes were genuinely listened to. The workshops also paved the way and were important during the project,” Laitinen says.

The premises are still waiting for students

The renovation project of the Linnanmaa campus ended in the summer of 2020, when the last premises were handed over to the Oulu University of Applied Sciences. At the same time, the coronavirus pandemic restricted the use of premises and the number of participants in meetings. In the autumn of 2020, the renovated premises were only partly used.

“The world will certainly change as a result of the pandemic, and the image of the future has been blurred for a while. However, we have conversion-flexible and attractive facilities, so we believe that once people can again access the campus, these facilities serve us well, and the students will be satisfied with the premises and the meeting possibilities. In any case, I look forward to discussions with SYK on future campus development,” Laitinen says.